The Speiks of South Pasadena

On April 14, 1870, at the age of 33, Carolina Speick (born Carolina Schuelke) boarded the Friedeburg in Hamburg. The Friedeburg was a three-masted sailing ship — hardly the latest in seagoing technology. Lacking steam power, she did not arrive in New York until May 31st. Forty-seven days! The Speiks must have had an uncomfortable and tedious journey, but all six of them made it, apparently in good health (since they were admitted to the United States).

The Speick children who traveled with Carolina were Emma, age 14; Wilhelm, age 13; Maria, age 7 “and a half,” Mathilde, age 6; and Emil, just eight months old. She would give birth to another child, John, in 1872, and there is some indication that John had a twin sister Elizabeth who did not survive. The gaps in ages between the five who traveled to America with her indicate other children who did not survive. In 1900, Carolina Speick stated on a census form that she was the “mother of twelve, six living.” Those were hard times for mothers and little ones alike.

At the time of this writing (May, 2018) questions are still being researched. Why was Carolina’s husband, Johann Speick, not traveling with them? Had he gone on ahead, and was the family traveling to join him in New York or Chicago? What brought the family to Chicago, where they largely remained?

The town they left behind was Schneidemühl (“sawmill”), in what was then Prussia. Schneidemühl had been around for hundreds of years, in a forest by the river Küddow. Due to its location in what is now Northern Poland, it “changed hands” fairly regularly as kingdoms went to war and victors redrew borders. The Speicks were definitely German in language and culture. I have not been able to discover how long they lived in the area, but there were a lot of Speicks in Schneidemühl in the 19th century … so many that I have not been able to identify which of several Johann Speicks married Carolina Schuelke. Another line of inquiry suggests that although Schneidemühl is where the family was certainly living in the late 1860s, Johann and Carolina may have begun their married life in Schleswig-Holstein, Germany’s northernmost province, which shares a border with Denmark. I have records that their first two children, Emma and Wilhelm, may have been born there.

After arrival here, I don’t know whether Carolina and the children lingered in New York or went directly to Chicago, but in 1872, I find Carolina Speick in the Chicago city directory living in the rear apartment at 325 North Carpenter. She lists herself as “widow of Johann.” I don’t know when the information for the 1872 directory was gathered, but she also gave birth in 1872. Her husband may have died while she was pregnant. Widowed in a strange land with six children … what strength she must have had, to persevere. And, eventually, to prosper.

Emma, 14 years old when she arrived in America, seems to have stayed a resident of Chicago all her life. On February 12, 1876, she married another German transplant, August H. Lewin. She was 20 and he was 24. August came over from Hamburg when he was 19, and worked as a clothing cutter. The Lewins had five children: Henry, Mathilde, Edwin Arthur, Martha, and Emma Louise. She was widowed relatively young, in her forties. Although her husband held a modest occupation, their son Edwin went to college and became a dentist. In the 1920 census Emma Speik Lewin is living with her son, Dr. Edwin Arthur Lewin, his wife Marie, and her grandson Wilbur (although Wilbur appears in the census as Dr. Lewin’s nephew, not his son–a bit of a puzzle). Unfortunately Dr. Lewin died in March of that year, just 41 years old. He died intestate, so my guess is that his death was sudden. Emma Speick Lewin died in Chicago on October 9, 1926. If we have photographs of her, they have not yet been identified.

Maria seems to have gone by “Mary” or “Marie” after the move to America, but she, too, married a German immigrant, Hugo Melchior — who sometimes went by “Hugh.” She was eight when she emigrated and he was nine. Doubtless they were bilingual by the time they married in Chicago on the 28th of November, 1883. By that time, he was 26 and she was 23. However, as late as 1930 they both declared that their native language was German. After the birth of their daughter Caroline, the family moved to Nebraska and their son Rudolph Melchior was born in Omaha in 1891. Mary was still alive at the age of 69 in the 1930 census in Omaha; I have not found a death record for her.

Hugo Melchior was a founder of the Melchior Bros. Barber Supply Co. of Chicago, which began selling in Omaha in 1897 with a location at 1119 Farnam St. The company was formed in 1880 in Chicago by Frederick and Hugo Melchior. They were well known for barber chairs and held several barber related patents. 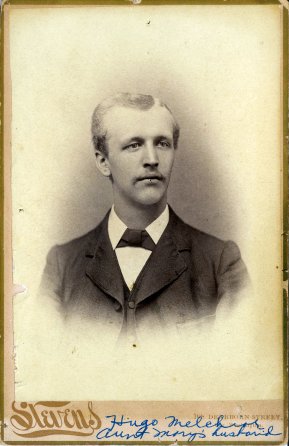 Mathilde was only five years old when her mother brought her to America, but she may have had an outsize impact on her siblings, since more than one of them named a daughter after her. She’s another Speick/Speik that I suspect we have a photograph of, if only we knew which of the unidentified women in the old photos is Mathilde. If we figure it out, I will update this post with her portrait.

Mathilde was the first Speick child to marry a native-born American; a true son of Illinois: William N. Shay, D.D.S. Believe it or not, when they were first married they apparently went by “Willie and Tillie” — those are the names on the birth record of their first child!  Mathilde and Dr. Shay had three sons and a daughter, but only the daughter and one of the sons survived to adulthood. The son, William Gray Shay, became a dentist like his father, served in World War I as a Captain in the Dental Corps, and at his death in 1960 received the honor of burial at Arlington National Cemetery. Mathilde died in Chicago on January 26, 1944. At some point along the way she Americanized the spelling of her name; her gravestone reads “Matilda Shay.” But she died during World War II, and many ethnic Germans felt conflicted about their heritage at that time.

Emil was only eight months old when he landed in New York. He and his brother John, born in Chicago in 1872, were almost certainly more American than German. Emil married Elizabeth Brink in October of 1892, but it may have been something of a “shotgun wedding” … Elizabeth was still a teenager and their son George Speik was born in 1893. Emil and Elizabeth divorced sometime before 1900. Emil remarried in June of 1914 when he was 47. His bride was Christine Kramer, also 47, so — depending on when he and Elizabeth divorced — George may have been his only child. I have found no others as yet.

John Speik seems to have never married. John was a carpet weaver and Emil was a brass moulder; they shared a home in Chicago for many years, first with their mother and then as bachelors after she passed. I have no record of John Speik ever leaving home or living alone. Tragically, just two days after Emil married Christine Kramer, John was hit by a car and died of his injuries the next day. He was 42 years old.

And now we come to Wilhelm, who went by William once he arrived in America. I am writing about him last because he is the forefather of our branch of the family. He was thirteen when he left Germany, and, as far as I can tell, he never saw it again.

The story of William and Emma